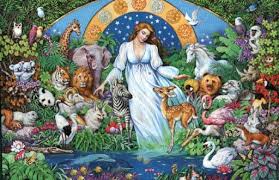 This is my belief  I have been look for a word that encapsulates my beliefs and feeling and I believe Animism describes it perfectly well almost.  I believe everything is connected and all living things have a Soul be them animal, plant or people.  (I do not believe all people have souls, many are soulless have an entity).  Everything has energy be it good or bad and leaves its imprint on life and the environment.

Animism (from Latin anima, “breath, spirit, life”) is the belief that objects, places and creatures all possess a distinct spiritual essence Potentially, animism perceives all things—animals, plants, rocks, rivers, weather systems, human handiwork and perhaps even words—as animated and alive. Animism is used in the anthropology of religion as a term for the belief system of many indigenous peoples especially in contrast to the relatively more recent development of organised religions

Although each culture has its own different mythologies and rituals, “animism” is said to describe the most common, foundational thread of indigenous peoples’ “spiritual” or “supernatural” perspectives. The animistic perspective is so widely held and inherent to most indigenous peoples that they often do not even have a word in their languages that corresponds to “animism” (or even “religion”) term is an anthropological construct.

Animism encompasses the beliefs that all material phenomena have agency, that there exists no hard and fast distinction between the spiritual and physical (or material) world and that soul or spirit or sentience exists not only in humans, but also in other animals, plants, rocks, geographic features such as mountains or rivers or other entities of the natural environment: water sprites, vegetation deities, tree sprites, … . Animism may further attribute a life force to abstract concepts such as words, true names or metaphors in mythology. For more information about Animism see link below

5 thoughts on “Animism – My Belief”